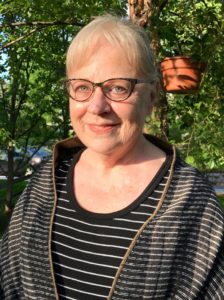 Her legacy is visible everywhere, from the welcoming bilingual signs punctuating Burlington’s downtown area to the lives she has touched from around the world.  On Tuesday, July 10, the Alliance Française lost one of its dearest friends, Madame Linda Pervier.  We remember her today by not only her selfless dedication to the spread of French language and culture in our region, but by her carefree way of being in the world.

Born in Maine into a Franco-American family, she adopted French language and culture at an early age and found it an essential part of living in New England.  She naturally took to volunteering at the AFLCR and drew others in to grow the organization as well.  “If anything, I can really credit her for introducing me and prodding me into getting more involved with it,” said Richard Gliech, longtime member of the AFLCR.

In 2013, Pervier was named full-time executive director of the AFCLR after several years of acting as a volunteer administrator and being decorated by the French Ministry of Education with les Palmes académiques.  Originally created by Napoléon, this award is given to those who have shown a tremendous commitment to the spread of French language and culture across the globe.  She was an integral part in converting Burlington into the Franco-friendly region it is today, which invites French speakers from around the world to come to Burlington to eat, shop, play and ultimately feel at home.

Pervier was always credited by her peers in the local Francophone community as being an integral part of the AFLCR’s success story.  “On the Board of the Alliance, I had the opportunity to really appreciate her unique mix of qualities that make great leaders: kind, steady, clear-minded, always one to offer solutions and alternatives that we can all agree on, and always ready to step in and take on additional tasks to keep things moving,” said Gliech.  “All this fueled by her passion for everything French and topped with good humor and optimism.”

Her passion for all things French was a fire inside of her kindled by a contagious lightness of spirit.  Her many triumphs included but were not limited to international diplomacy with France and Canada, creating a welcoming space for the Quebecois and other Francophones in Burlington, and showing the best that French language and culture has to offer to Francophiles in Vermont.  “Linda undertook projects with great enthusiasm and committed herself to seeing them through,” said Dana vanderHeyden, with whom Pervier worked over the past several years.  “It seems as if Linda always had the respect and admiration of everyone who came in contact with her, and she has certainly left an indelible mark on the AFLCR of today.”

Among the many projects that Pervier spearheaded was the Crème de la crème cultural event in 2012.  Held at Burlington’s waterfront theater, the event celebrated a cultural mélange between France and Vermont, topped off with locally-made French-style cheeses.  Pervier’s longtime friend and colleague at the AFLCR, Lise Veronneau, remembers Pervier for her particular attention to “the little things” at the Crème de la crème.  “She was the consummate hostess,” said Veronneau.  “She valued my Burlington connections and I helped her to navigate the rules.  We did everything right so that the event could have that ‘French feeling,’ and I mean everything – right down to the wine glasses.”

Pervier is remembered by Veronneau as someone with whom she could share a meal, an idea or a piece of her heart.  “We have a good time together, sharing a laugh along the way like the trips to the Boston Consulate in her Volkswagen bug, said Veronneau.  “Going to a Bastille Day celebration, we had a few adventures.  We enjoyed brainstorming sessions and planning for the future of Alliance Francaise.  We talked about our personal lives as well and how important family is.  The ability to be open and the trust that we had in each other is precious.  It enabled us to communicate well.  We knew what the other wanted and we would get it done.”

Close friends of Pervier will tell you that she was someone who appreciated the magic in the details.  She loved to celebrate French culture, was constantly singing, and always surrounded herself with works of art.  She cultivated a life for herself that was teeming with beauty and joie de vivre.  She will be remembered for the pieces of herself she gave to not only the AFLCR, but to those around her wherever she went.  We will always carry her with us.

A memorial service will be held at 2 p.m. on July 28 at the Unitarian Universalist Church at the top of Church St. in Burlington, VT.