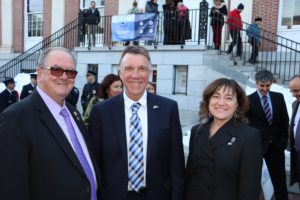 The Lise Veronneau that we know

The petite corner office of the Burlington Police and Fire Department isn’t where you’d expect to find one of francophone Burlington’s most expansive and energetic personalities, but it’s the place that accommodates Lise Veronneau on weekdays.  Her office space is well-lit and swollen with potential energy.  Potted plants and flowers line the windows and fill the space unoccupied by stacks of paper.  Being in her presence is akin to standing next to a campfire.  Her voice is warm-toned and crackling with joie de vivre, and her unassuming nature invites you to settle in and stay for a while.

Veronneau is something of a superhero figure; Business Manager and Alliance Française Board Member by day, and super-networker by night.  “I just love connecting people,” she said.  “I love to help people become all that they can be.”

To many in the community, she is known as a vital member of the AFLCR board, as well as by her contributions to francophone-friendly Burlington business initiatives and her coordination of countless francophone community events.  However, if you extend your search, you’ll find that outside of the local community she has come to be known as The Lady from Vermont, having been at the helm of the Honfleur Sister City Partnership, celebrating over 400 years of international cooperation and strengthening the bond between France and “New France” here in the Americas.

Veronneau’s passion for French language and culture is buoyant in all that she does, even in what we do not see of her.  A closer look at what many do not know about her gives us clues as to how she became both an engineer and architect of connection in the global francophone community.

Je ne m’abandonne jamais or I’m never giving up on myself is a saying that was passed on to Veronneau by her father, Daniel Mathieu, a Quebecois immigrant and driven entrepreneur.  “I’m proud he made us Americans,” she said.  “Having grown up here with the everything-is-possible attitude, my siblings and I became independent thinkers.  We were raised to be proud of who we were and we kept our French.”

It’s evident that much of Veronneau’s tenacity and hunger for innovation was inherited from Mathieu.  Shortly after emigrating from his home in Saint-Samuel, Québec and while fueling his car at a Pine St. gas station, he made a fateful connection with a local French speaker.

The man at the gas station took Mathieu to a local General Electric where he was able to quickly fix a heat-treat furnace used to make airplane engines and was hired for work on the spot.  He later went on to become the creator of the Spearhead Spade, a patented, ergonomically-constructed shovel which is designed to be able to penetrate through the tough New England soil more efficiently than a conventional tool.

Veronneau is now trying to pass the persistence and French language she learned from her parents on to her two-year-old grandson, Ari.  “I can’t wait to see him grow up and maybe help with the family business,” she said.  “The whole family is made up of engineers.”

She learned to speak English in her role as Rapunzel

Veronneau grew up watching Mary Tyler Moore and Jane Fonda in their heyday.  She said that as a little girl, watching these women in film and on TV, she wanted to be just like them.  She wanted to be powerful and influential.  She wanted to manage.  “As a kid, I used to pretend with all the neighbor kids that I was the teacher,” she said.  “I loved to pass out papers.  It was task delegation.  I was always giving them projects to get done.”  She was going to rule the world from a young age, but the one thing she needed to do to expand her reign was to improve her English.

Growing up in New England and speaking only French at home, Veronneau struggled a bit to find her voice in English.  It was while she was in fifth grade that her teacher, Mrs. Carney, suggested that she try acting in the school play, Rumpelstiltskin.  “I was Rapunzel,” she said.  “I was so scared that I would be embarrassed, but I ended up having so much fun.  English just wasn’t a struggle after that.”

When you ask Ernie Pomerleau, President and CEO of Pomerleau Real Estate about Veronneau, he is quick to extoll the benefits of being so close to her.  “I’m like the hardware and she’s the software,” said Pomerleau.  “She is a can-do person, she’s up-front, and she doesn’t wait to initiate connection.”

Much of Pomerleau’s respect and admiration for Veronneau has emerged through their shared passion for strengthening francophone culture in Vermont.  For the two, cultivating symbiosis between the francophone communities in Vermont and neighboring Québec – even extending across the Atlantic to France – is their shared devotion.  “She has a passion for her French culture and for getting Burlington connected,” said Pomerleau.

Pomerleau mentioned one of his favorite memories of Veronneau, which occurred at the beginning of the Sister City initiative with Honfleur.  What he described was a moment where she was able to witness firsthand the growth of the seeds she had planted.  “It was the first time she had been to France,” he said.  “There she was, this woman who was the heart, the person who put together the Honfleur Sister City.  Her eyes just lit up.  She did all this work and there she was speaking French in Honfleur.

Ask her about Korean culture

When she’s not forging connections across the francophone world, Veronneau finds solace in several active and creative hobbies.  It is well-known that she has countless achievements under her belt, but not many know that the belt itself is black.  “I actually did Korean martial arts for over 15 years and trained on my own,” she said.  “I even earned my black belt.”  Her exposure to Korean martial arts has also functioned as exposure to the Korean language.  Aside from being fully English-French bilingual, she also knows a thing or two in Korean.  “I can count,” she said, the words spilling out in a laugh.  “And I can say some courtesy words, too!”

Veronneau also nurtures her artistic side, working in several media from the culinary arts to the visual.  She said that she loves to spend free time experimenting in the kitchen and painting.  Trained by a friend who is an artist, she learned how to paint in watercolor and now boasts several limited edition prints in the medium.  “I picked watercolors because they’re the most difficult to control,” she said.  “I’m such a control freak and I was told that it would be good for me to work with the free-flowing watercolor.”

Breaking down barriers and building connection

There never was a more perfect metaphor for Veronneau herself than that of the very watercolor paint that she loves to lose herself in.  It’s in her nature to mix, blend, and pour over the perceived barriers in which the the global francophone community builds for itself.  Her impetus is connection and she makes it known around the world.  During a 2015 panel discussion for the North American Francophile and Francophone Cities Network, she was asked about the distinction between what is francophile and what is francophone.  “We’re all French,” she responded bluntly.  “What difference does it make?”