(Drama by Francis Fortin, Alexis Fortier Gauthier & Maxim Rheault, 1h22 min)
Sébastien owns a bookshop and has literary ambitions of his own. He befriends Joseph, an established novelist whose work he admires. But when Joseph is killed on his doorstep, Sébastien discovers a mysterious manuscript left behind. Sasha, Sébastien’s only child, witnesses Joseph’s death, and the effects run deep. She finds herself drawn to the author’s son Sidney, and starts a relationship with him. As the two grow closer, the secrets of their fathers threaten their relationship and lead each of them to seek the truth behind the lies.

The film is in French with English subtitles (even though the trailer does not have subtitles).
Snacks are provided. Parking on campus is very easy. 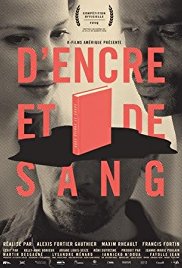