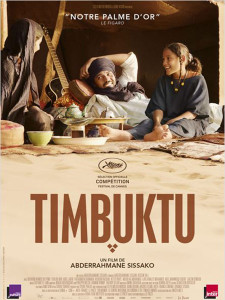 The film looks at the brief occupation of Timbuktu, Mali by Ansar Dine. Parts of the film were influenced by a 2012 public stoning of an unmarried couple in Aguelhok. It was selected to compete for the Palme d’Or in the main competition section at the 2014 Cannes Film Festival. At Cannes, it won the Prize of the Ecumenical Jury and the François Chalais Prize. It was nominated for the Academy Award for Best Foreign Language Film at the 87th Academy Awards.

Note: AF card holders who would like to become Vermont International Film Festival members can get approximately 20% discount off the membership: The $49 Friend level would be only $40 and the $149 Patron level would be $120.

Subscribe to our Alliance Française Newsletter!
and stay updated on Events, Classes, Projects and More.
One email a week maximum.
Register by providing your email address here:

Email Marketing You Can Trust