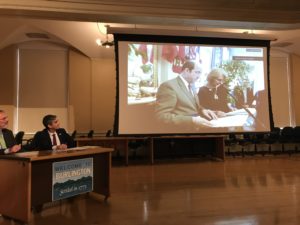 And read here the article in French just published in Ouest France on the historic signing which took place earlier this month: https://www.ouest-france.fr/normandie/honfleur-14600/honfleur-burlington-la-charte-du-jumelage-est-signee-6598189

And here, the press release given by the Burlington-Honfleur Sister-City Committee last month:

Burlington, VT – A delegation from Burlington will visit Honfleur, France in early November to sign a sister city charter.  Ten years after the first Burlington representatives visited Honfleur to honor the 400th anniversary of Samuel de Champlain’s discovery of the lake to which he gave his name, the two parties will meet to formalize an ongoing sister city connection.  Champlain made numerous trips to New France (now eastern Canada), most frequently departing France from Honfleur harbor. This charter will further tighten the history and ties between our two cities, following the signing of a Friendship Agreement during a visit by an Honfleur delegation in July 2013.

Since the initial visit to Honfleur by a Vermont group in 2009, there have been numerous visits and exchanges involving high school students, Boy Scouts, Champlain College students, Vermont artists and residents, including a recent stay with host families by members of the Alliance Française of the Lake Champlain Region this summer.  Honfleur officials and residents have been hosted in Burlington in 2013 and 2017 and there are already talks of a future trip to Burlington in 2020 or 2021.  These exchanges aim at promoting and understanding our respective cultures and economic development opportunities in a global and mutually rewarding way.

Burlington Mayor Miro Weinberger and his Honfleur counterpart Michel Lamarre, who have met on several occasions in the past, will both sign the charter in a ceremony held simultaneously via videoconference in Burlington City Hall’s Contois Auditorium and Honfleur City Hall on Tuesday, November 5th at 10:30 a.m. (EST).  The delegation traveling to Honfleur includes Ernie Pomerleau, Honorary Consul of France to Vermont, Lise Veronneau, Chair of Burlington’s Honfleur Sister City Committee, who was recently awarded France’s prestigious title of Chevalier (Knight) de l’Ordre National du Mérite,  Dana vanderHeyden, named Ambassadrice de Honfleur aux Etats-Unis by Mayor Lamarre and coordinator of many trip exchanges, and Marc vanderHeyden, former president of St. Michael’s College. Margaret Pond and Fran Stoddard will also represent Burlington’s Honfleur Sister City Committee. Mayor Miro Weinberger will be in Burlington for the coordinated simulcast celebration, when both mayors will sign the charter, thus officially connecting the two cities.  The public is invited to attend.

“Burlington is honored to be partners with Honfleur in furthering bonds of friendship and respect between our two cities, and in emphasizing the importance of building relationships of cross-cultural trust and understanding,” said Mayor Miro Weinberger. “I am excited to formalize our excellent relationship with the city from which Samuel de Champlain left often for the Americas and the lake named for him. Our Sister City relationship provides us an important opportunity to build on the historic bonds that bind us and deepen our cultural ties.”